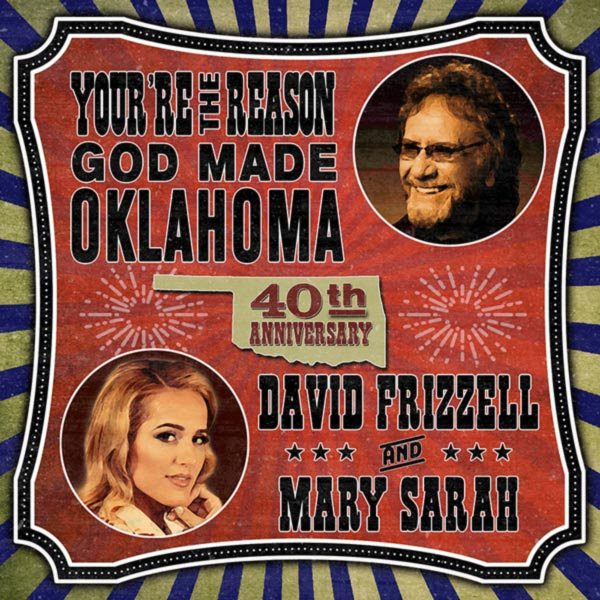 CMA and ACM award-winning and Grammy-nominated hitmaker, David Frizzell along with The Voice Season 10 finalist, Mary Sarah partner with Time Life to release a new version of the iconic duet, “You’re The Reason God Made Oklahoma.” Originally recorded by Frizzell and Shelly West in 1980, the song was included on the soundtrack for Clint Eastwood’s film “Any Which Way You Can” and reached number one hit in 1981. In 2005, “You’re The Reason God Made Oklahoma” was included in CMT’s 100 Greatest Duets in country music, reaching number six. Now in 2021, commemorating the 40th anniversary of the hit single, Mary Sarah joins Frizzell to bring new life to the classic love song.

Visit HERE to listen to “You’re The Reason God Made Oklahoma” on Wide Open Country.

Visit HERE to watch the “You’re The Reason God Made Oklahoma” acoustic video premiere on Taste of Country.

“I am so beyond honored and excited to be a part of such a classic and iconic song. It’s honestly crazy how things come full circle in life. I have sung “You’re The Reason God Made Oklahoma” since I was a little girl with my dad and did I ever think that there would be a day where I would get to pay tribute and sing it with David Frizzell himself?! Not at all. So, this is so very big for me and I hope you enjoy it as much as we enjoyed remaking it!!. Thank you to David and Shelly for creating such an amazing song and allowing me to be a small part in sharing it with the world,” shares Mary Sarah.

Mary Sarah’s polished sound paired with Frizzell’s classic country tone stands out as “the duo that country music never knew they needed.” Now more than ever, the world needs a love song that slows time and sends a sense of passion into the hearts of all who listen. In times of varying levels of social distancing, Mary Sarah has done her best to continue to spread positivity to fans by sharing a new acoustic video on Instagram and YouTube every Wednesday and sharing family photos with their new little bundle of joy, Avalyn Mae.

“Every artist dreams of the day when one of their songs becomes a hit so big that it withstands the test of time,” shares Frizzell. “You’re The Reason God Made Oklahoma” has done just that. I am excited to be teaming with Time-Life and Mary Sarah to give this song a modern twist while remaining true to its classic sound.”

David Frizzell is one of the greatest voices in country music with a haunting resemblance to his older brother, the ultimate stylist, Country Music Hall of Fame member Lefty Frizzell. Both share that raw, forlorn quality that is essential to the interpretation of traditional country themes. As a producer of the popular Frizzell & Friends series of projects, David brings together some of the top performers in the business for both live and recorded projects such as Crystal Gayle, T. Graham Brown, Johnny Lee, Lacy J. Dalton, and more.

In recent years, Frizzell created his label Nashville America Records, and has released several albums including Frizzell & Friends: This Is Our Time which includes a bonus track, written in honor of Lefty Frizzell, Merle Haggard, and traditional music in general. “Lefty, Merle & Me” features David with Marty Haggard.

About Mary Sarah:
With more than 10 years of performing, you could say this young woman has been given a “coat of many colors”. The fabric of her life brings forth a vast array of opportunities and experience. Mary Sarah was raised in the Texas Opry circuit where she first began defining and honoring her traditional country roots. She then went on to land a major touring role with Kidz Bop at the age of 12. Combining her touring experience with her love of traditional country music gave way to a once-in-a-lifetime album – duets featuring Country Music Legend’s like Dolly Parton, Willie Nelson, Merle Haggard, Ray Price, and much more – all before the age of 18.

In 2016, America embraced her on the #1 rated TV show in the country, The Voice. Her blind audition garnered her a 4-chair turn singing country’s iconic “Where The Boys Are” by Connie Francis – a tune that continues to garner standing ovations and whispers of the greatness of her mentors; Patsy Cline, Dolly Parton, and the likes of Carrie Underwood and Miranda Lambert. She quickly advanced onto Team Blake.

Her undeniable talent and infectious spirit have since kept her in the spotlight. Since finishing 5th on of The Voice (Season 10) & serving as The Kohl’s Greenroom Host (Season 11), the Texas ingénue’s opportunities have only expanded coming off the show to include her Grand Ole Opry debut, Ryman stage appearances touring across the United States and hosting Radio Disney’s Red Carpet coverage for the CMA Awards. She has graced the iconic stage of the Opry a total of 5 times since.

About Time Life:
Time Life is one of the world’s pre-eminent creators and direct marketers of unique music and video/DVD products, specializing in distinctive multi-media collections that evoke memories of yesterday, capture the spirit of today, and can be enjoyed for a lifetime. TIME LIFE and the TIME LIFE logo are registered trademarks of Time Warner Inc. and affiliated companies used under license by Direct Holdings Americas Inc., which is not affiliated with Time Warner Inc. or Time Inc.