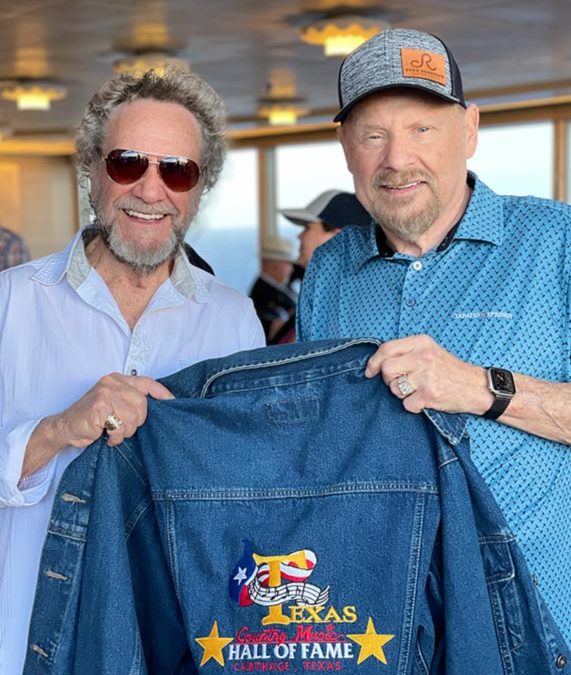 CARTHAGE, Texas. – This coming August, CMA and ACM award-winning and Grammy-nominated hitmaker, David Frizzell will have the prestigious honor of being inducted into the Texas Country Music Hall of Fame. Frizzell received the exciting news from Carrie & Debbie Moore (Moore & Moore/ Third Coast Talent) along with country artist and fellow Texan and Hall of Famer Moe Bandy while performing on the 2022 Country Music Cruise. With this summer marking the 20th anniversary of holding the event, The 2022 Texas Country Music Hall of Fame celebrates outstanding contributors to the industry.

“It was a wonderful feeling to be surprised with the announcement that I will be inducted into the Texas Country Music Hall of Fame this August,” shares Frizzell. “This is a wonderful honor and I am thankful to have been chosen this year!”

“The Texas Country Music Hall of Fame has been honoring country music legends for 25 years and we can’t think of a better person on our 25th Anniversary than David Frizzell who continues to keep traditional country music alive,” shares Tommie Ritter Smith, President.

Frizzell recently celebrated the 40th anniversary of his chart-topping tune, “You’re The Reason God Made Oklahoma.” As part of the anniversary, Country Rebel lifestyle outlet premiered four special performance videos by Frizzell including the hit song, as well as “That’s The Way Love Goes,” “If You’ve Got The Money, I’ve Got The Time,” “Lefty, Merle, and Me,” and “I’m Gonna Hire a Wino To Decorate Our Home.” The performances were videotaped at the Country Rebel ranch in Ashland City, Tennessee, showcasing Frizzell’s timeless talent.

About David Frizzell:
David Frizzell lived all over Texas starting in Greenville Texas in the early ’40s when his dad went to Europe in WW2. He had his first radio show at the age of 9 in Kermit, Texas, then on to Sulphur Springs where they lived when brother Lefty got his first number one hit (and younger brother Allen was born). He began touring with his legendary brother, Lefty Frizzell at the age of 12 throughout the 1950s and 60s. After serving in the Air Force, Frizzell signed with Columbia Records in 1970 and charted his first Billboard single with “L.A. International Airport” and then a Top 40 with “I Just Can’t Help Believing.”

David Frizzell is a timeless and tireless entertainer who continues to share his many gifts to the delight of fans old and new across the US and throughout the world.
# # #
Suggested post:
.@FrizzellMusic to be inducted into #TexasCountryMusicHallofFame in August