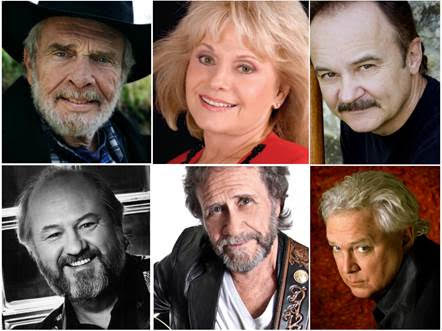 David Frizzell, on behalf of the Buddy Holly Educational Foundation, announces the release of 21-track collection

(Nashville, TN) — Country Music legend David Frizzell, along with The Buddy Holly Educational Foundation, is pleased to announce the upcoming release of a special musical collection, The Buddy Holly Country Tribute: Remember Me.

The indelible legacy of Buddy Holly continues to touch fans and has inspired decades of artists across multiple genres. Although he only played rock and roll for a few years, the breadth of material Holly recorded made an enormous, lasting impression on popular music. In recent years, Holly has been honored with a six-disc career retrospective, a pair of best-selling tribute albums, and two Grammy nominations for works inspired or created by the Rock and Roll Hall of Famer.

Now, Country Music star David Frizzell has gathered a cadre of music’s elite for a very special homage to Buddy Holly with The Buddy Holly Country Tribute: Remember Me, set for release on Sept. 7, 2014, (on what would have been Holly’s 78th birthday). The musical collection includes a DVD on the making of the project. The album is a benefit for the Buddy Holly Educational Foundation, a charitable organization focused on musical education and co-founded by Buddy’s widow, Maria Elena Holly.

While Buddy has been cited as “the single most influential creative force in early Rock and Roll,” his roots and earliest influences were bluegrass and country music with artists like Hank Snow and Lefty Frizzell. One of the first songs that Buddy learned from his older brothers, although he never recorded it, was Scott Wiseman’s “Remember Me.” Merle starts off this great tribute with his version of “Remember Me.” Jimmy Fortune, Helen Cornelius and David Frizzell close out the collection with their version of the same tune. In between is woven a musical tale of the Buddy Holly legacy in song.

“I’m a huge Buddy Holly fan. Crafting this project in his honor has been a very moving experience,” Frizzell says. “Everyone involved felt that we were creating something very, very special.”

The tribute album is narrated by David Frizzell, who introduces each song and its comments on its significance to Buddy, his career and his remarkably lasting legacy.

Two songs in the collection have a unique backstory. At the request of the Buddy Holly Educational Foundation, David Frizzell wrote “Maria Elena” for Buddy Holly’s widow, Maria Elena Holly, as a gift for her 80th birthday. “Walk Right Back” was written by Sonny Curtis and made a hit by The Everly Brothers. Phil Everly was a close, personal friend of Buddy and Maria Elena. It was hoped that Phil would be a part of this special collection, but the artist passed away during the making of the project. This song is included as a tribute to the friendship Phil Everly shared with Buddy and Maria Elena Holly.

“Buddy has stayed relevant because of the fans. There are so many of them around the world, and they have kept him alive. They love him; they have remained loyal to him; they keep his music alive; they still play his music,” said Maria Elena. “And also his fellow musicians who are recording his music today. They tell me that they take what they feel from Buddy’s songs, and then they make it their own. All of the musicians who keep playing Buddy’s songs, they also keep Buddy’s spirit alive.”

About The Buddy Holly Educational Foundation
The Buddy Holly Educational Foundation is a charitable corporation co-founded by Maria Elena Holly to honor the music, life, legacy and dreams of Maria Elena’s late husband Buddy Holly. The mission of the Foundation is to honor Buddy Holly’s tremendous legacy and to fulfill Buddy’s and Maria Elena’s dream of extending musical education, including songwriting, production, arranging, orchestration, and performance education to new generations regardless of income or ethnicity or learning levels. In this way, the Foundation wants to empower a new generation to follow in Buddy’s footsteps and remind them of his heritage. For further detailed information on the foundation please visit: www.tbhef.org

David Frizzell is one of the greatest voices in County Music. His voice has a haunting resemblance to his older brother, the ultimate stylist, Lefty Frizzell, about whom David authored a biography in 2011. (The book was named by CMT as one of the Best Music Books of the year.)

While still a teen, David began touring with his legendary brother and was soon recording country and rockabilly albums for Columbia Records. David parlayed his recording success into headlining country shows in Las Vegas, a bold move that paved the way for other country acts in Las Vegas.

In the early 1980s, Frizzell founded the musical duo of Frizzell & West with Shelly West, daughter of country superstar Dottie West. Their recording of “You’re The Reason God Made Oklahoma” was chosen by Clint Eastwood for the soundtrack of the film, Any Which Way You Can.  The song became a smash hit (ranking #6 in the CMT Countdown of the 100 Greatest Duets) and the duo went on to be one of the most awarded acts in entertainment.

Frizzell always maintained a vibrant solo career, scoring the huge chart-topping hit, “I’m Gonna Hire A Wino (To Decorate Our Home).” The record is a country music standard, and has been featured on CMT’s 40 Greatest Drinking Songs in Country Music.

Frizzell is a multi-award winner with honors from the Country Music Association, the Academy of Country Music, Billboard and Music City News. He is a three-time Grammys nominee who does not rest on his many accolades. The writer, producer and performer remains active on the touring circuit, in the studio and through almost countless other creative endeavors. For more, visit www.davidfrizzell.com