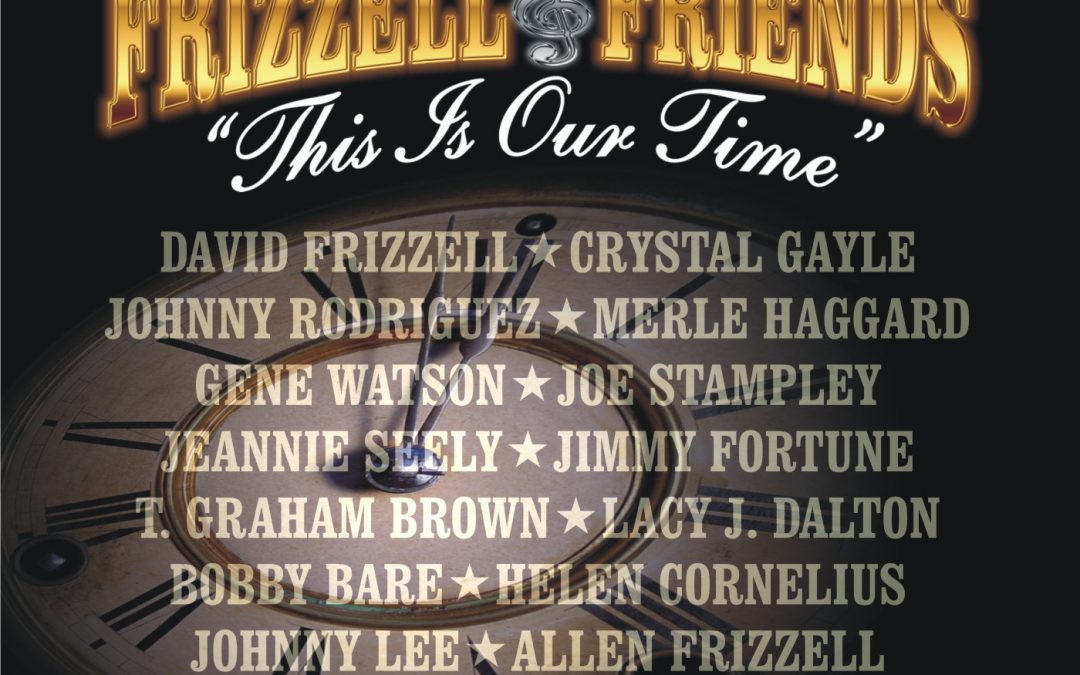 David Frizzell, Country Music-Legend, Lefty Frizzell’s younger brother, was born September 26, 1941 in a small town with the pretty name El Dorado, Arkansas. With the two number 1 hits “You’re the Reason God made Oklahoma” (together with Duet partner Shelly West, who at one time was married to his brother Allen) and “I’m Gonna Hire A Wino To Decorate Our Home” as well as top 10 hits “A Texas State of Mind“, ”Another Honky-Tonk Night On Broadway”, ”I Just Came Here To Dance”, “Lost My Baby Blues” and “Where Are You Spending Your Nights these Days”, celebrates the Singer, Songwriter and Musician from the 80er Years his biggest Chart successes. The fruitful collaboration with Shelly West, the daughter of the Grand Ole Opry-singer Dotty West, (who passed away in an accident) was 1981 and 1982  awarded  “Vocal Duo of the Year by the CMA as well as the ACM. Many years after divers awards and honors and chart successes David’s heart still beats for the traditional country music. The chance to hear that music is slim today. His fans do appreciate his music tremendously.

With this new album “David Frizzell & Friends: This Is Our Time” (the man with the unmistakable LEATHER-VOICE) proves that traditional country music is alive now and for the future to come. The star-line-up on the album shows that many of his age and talent are like-minded. All of them followed David’s invitation to join him at the studio. The songs, many written by David himself, where recorded for his own label. With all the talented Nashville musicians to accompany the singing artists, a very famous and nostalgic county album was created. Merle Haggard even brought his own band along. The fan’s love to hear and identify with all the famous artists. Thinking back to the years when each artist has had his or her unique recognizable voice. To one group of fans that means walking into the passed, to an older generation now. To another, who just know what is offered by the Nashville-Majors today under the label country music, a senior-combo who’s names don’t say much anymore.

It was not easy for David to come out from behind the huge shadow of Lefty. But  David has earned his respectable place in country music history. With “Frizzell & Friends“, David and his friends have created a priceless album. On top of the 20 songs, about 75 minute play time on the CD, a DVD is a bonus gift. With all the country artist in the studio working and interacting. One can experience the working, laughing and exchanging idea’s and life-stories. Even though some of the scenes came out quite dark, it is a pleasure to watch this DVD. One should definitely add to his county music repertoire.

If I were pressed I would have to admit that Lefty Frizzell was my all-time favorite country singer. But Lefty is not the only Frizzell to record country, David and Allen, his brothers have, and still do, cut quality records. David joined Lefty’s band when only twelve years of age and later went on to record solo hits and duo hits with Shelley West. These days David is still recording, not only himself, but also other hit makers of yesteryear too. Frizzell and Friends “This Is Our Time” (Nashville America/BSW) is a superb album featuring brother Allen and fourteen friends. Twelve of these friends join together for the title cut with each artist throwing in one line of one of their hits to create a really exciting atmosphere. David Frizzell has a couple solos (“Dream Of Angels” and “No Regrets”) with former Statler Brother Jimmy Fortune also soloing on the beautiful “How Long’s Love Gonna Put Up With That” but mostly it is duets with such greats as Merle Haggard (“If You’ve Got The Money, I’ve Got The Time” – reminding us of the great Lefty), Bobby Bare (“Cowboy Hat”), Gene Watson (“Long Black Veil”- another reminder of Lefty), Joe Stampley (“Music”), Johnny Lee (“You Can’t Love Her”), T. Graham Brown (“Got to Get To Louisiana”), John Cowan (“Reckless Wind”), Allen Frizzell (“Three Minutes”) and Johnny Rodriguez (“Warm Spanish Wine”). But it is not all guys. The ladies are well represented with Crystal Gayle (“Wedding Dress For Sale”), Amy Clawson (“Why Wasn’t It Me”), Helen Cornelius (“Could It Be We Fell In Love Tonight”), Jeannie Seely (“Nobody’s Darling But Mine”) and Lacy J. Dalton (“Something ‘Bout You”). A remarkable line-up of talent that is well served by some of Nashville’s finest musicians and Merle Haggard’s band, The Strangers. Accompanying the CD is a DVD showing how the album was put together with interesting footage of the stars, as you have probably never seen them before. And speaking of film, David is currently involved in making a movie of the life of Lefty Frizzell. The producer will be Patrick Markey who worked on “A River Runs Through”, “The Horse Whisperer”, “The Associate” and others. The screenwriter is Elwood Reid.

FRIZZELL & FRIENDS/This Is Our Time — This is great fun. Each singer steps up to the mic and sings the hook of one of his or her hits and you can make a game out of guess-the-star. I caught snatches of Lacy J. Dalton, Helen Cornelius, Jimmy Fortune, T. Graham Brown, Johnny Rodriguez, Gene Watson, Crystal Gayle and Merle Haggard, as well as David Frizzell. How many can you identify?

FRIZZELL & FRIENDS “This is Our time” A brilliant new CD featuring 14 country music super stars all of them appear on “THIS IS OUR TIME” track, all the other tracks are mainly duets. DAVID FRIZZELL, ALLEN FRIZZELL, MERLE HAGGARD, JOHNNY RODRIGUEZ, HELEN CORNELLIUS JEANIE SEELY, GENE WATSON, T GRAHAM BROWN, & CRYSTAL GAYLE just to name a few of the well known artist’s. These excellent tracks come over the best and are my favourite’s THIS IS OUR TIME, WEDDING DRESS FOR SALE, THREE MINUTES & WHY WASN’T IT ME. Followed closely by COULD IT BE WE FELL IN LOVE TONIGHT, NO REGRETS, RECKLESS WIND & SOMEDAY. This is a top class great traditional CD and I thoroughly recommend it terrific singing and music on all 20 tracks.

This is a set that is straight out of left field. In 2008, country music singing and songwriting legend David Frizzell decided to cut a different kind of album. He assembled a who’s who of country music from one of its most vital yet bygone eras by today’s slick standards, as Nash Vegas has decided to literally forget the still vital artists who helped to establish it as one of the most potent forces in American popular music. Frizzell’s This Is Our Time lays down a convincing argument that these artists are every bit as viable as they were back when they were reigning on the charts. Featured here is a set of his own songs and covers, sung as solos and duets with friends. There are some very big names: Crystal Gayle, Merle Haggard, Johnny Rodriguez, and Bobby Bare make up the best known, but the next-tier artists are just as important. They include Jeannie Seely, Gene Watson, T. Graham Brown, Johnny Lee, Lacy J. Dalton, Helen Cornelius, and Jimmy Fortune, to name just a few. The beauty besides the music lies in the fact that Frizzell doesn’t give a damn about enlisting any current Nashville A-list or Billboard-charting talent. He’s got plenty right here.

The set opens — rather than closes — with a group number. It’s the title track, written by Frizzell, Tom Botkin, and Kevin Denney, and incorporates within it the name lines of hits from every one of these performers. That said, it is easily displaced by some of the other performances here. For starters, there’s “Wedding Dress for Sale,” with Gayle. Neither her voice nor Frizzell’s has been touched by time. The empathic communication between the two is stellar, and Frizzell’s tune is one of those brilliant stories that has been part and parcel of the country music tradition since the beginning. This is followed by a killer version of Roger Alan Wade’s”Warm Spanish Wine,” a duet with Rodriguez. Its sad beauty conjures memories of Marty Robbins, Ronnie Milsap, and Freddy Fender. While the version of “Long Black Veil” here — recorded with Watson — doesn’t replace Johnny Cash’s classic version, it is a killer nonetheless. Hag and Frizzell team up on brother Lefty’s “If You Got the Money, I’ve Got the Time.” Haggard has recorded it before and so has Frizzell, but together they capture the party-time joy in the lyric with a classic honky tonk swing melody. The rockin’ country of “Cowboy Hat” belongs to Bare and Frizzell. The former’s big throaty baritone owns the tune, but it’s a stellar moment from country music’s outlaw era. The raw sensuality between Helen Cornelius and Frizzell on “Could It Be We Fell in Love Tonight” offers an accurate portrayal of love breaking through the bonds of lust. The track “Three Minutes” is a stellar trio number between David, brother Allen, and Allen’s daughter Tess Frizzell (whose mother is Shelly West). Tess is perhaps the most welcome surprise in the bunch, coming up from a new generation. The woman’s voice is all killer, no filler. The other up-and-comer is Arkansan Amy Clawson, one of the youngsters of the group at only 34, who appears on the songwriter’s “Why Wasn’t It Me,” and the older style of material suits her beautifully. The solo numbers are no less effective here — Frizzell is a writer of real consequence and always has been, despite the fact that his deceased older brother has overshadowed him. Check the two-step honky tonker “No Regrets” or the lilting ballad “Dream of Angels” for rock-hard proof. Included in the package is a DVD that features an intimate, warts-and-all video documentary on the making of the album. This goes as far as the album in revealing that these artists still possess their gifts (even in some cases if their voices are lower). This is well done and one of the dark-horse candidates for indie album of the year in country.

I’ve never been inclined to get overly excited about concept albums but as soon as I began listening to the first song on this two CD set I knew I was listening to something very special.

David Frizzell’s voice is still absolutely wonderful and he has chosen fifteen of the most talented singers in the business as his duet partners. He wrote nine of the songs and was co-writer of another one, all of which are really good, but my favorites are covers of several old standards including ‘IF YOU’VE GOT THE MONEY, I’VE GOT THE TIME’ with Merle Haggard and ‘NOBODY’S DARLIN BUT MINE’ with Jeannie Seely.

She one song that absolutely blew me away was ‘LONG BLACK VEIL’ which was recorded with Gene Watson. I know this song has been recorded by many other artists in the past but this version ranks right up near the top with the very greatest! This 20 song two CD set will knock your hat in the creek!
DH